Where to find us

Heading north on Autobahn 115, merge onto “Stadtring” (A100) in the north direction toward Wedding. The A100 will become “Seestraße“. Next, turn right onto “Müllerstraße“. This street will become “Chausseestraße“. Next, turn left onto “Liesenstraße“. Continue through the roundabout onto “Scheringstraße“. This street will become “Gustav-Meyer-Allee”. Next, turn right onto “Brunnenstraße”. The next intersection will be “Voltastraße”. Turn right and drive about 300 meters. The entrance to the parking lot will be on the right side (it is also the entrance to “Deutsche Welle”).

Beginning from the train station “Zoologischer Garten”
, take the subway U9 to “Osloer Staße”.
From here, change trains and get on the U8 heading in the direction of ”Hermannstraße”. Get off the train at the “Voltastraße” station.

2. Take the S3 heading in the direction toward “Erkner” (or the S5 heading toward “Strausberg Nord”, or the S7 heading toward “Ahrensfelde”, or the S75 heading toward “Wartenberg”). Get off the train at the “Alexanderplatz” station. From here, take the U8 heading in the direction toward “Wittenau”. Get off at the “Voltastraße” station. Take the stairway up that is toward the direction of travel. Travel time is about 25 minutes. After exiting at the “Voltastraße” station, head down Voltastraße about 150 meters and turn right at the driveway (Voltastraße 3) that goes through the building. After crossing under the building, take an immediate left through the fence gate. Head to the entrance marked “Gebäude 10 (building 10), Treppe 2 (Stairway 2)”. The reception is on the 2nd floor. Please ring.

Directions on the site 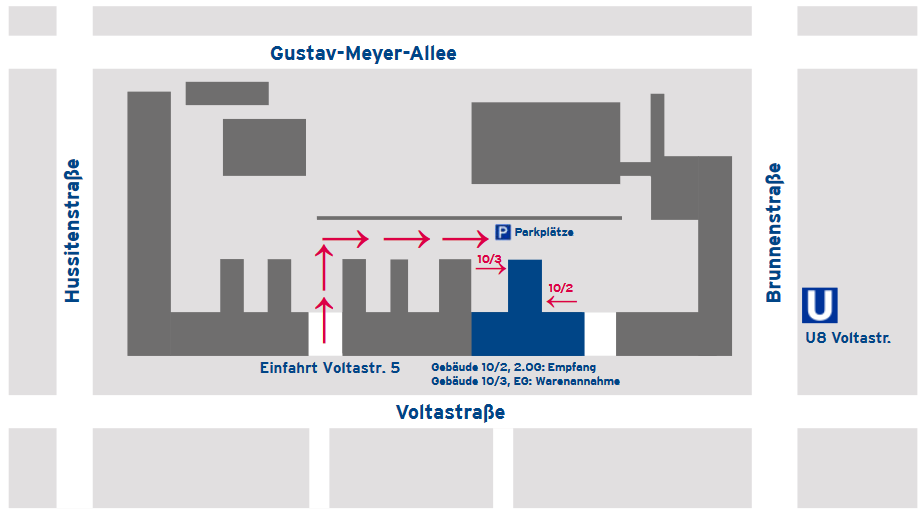